Last time, I gave an overview on how we can capture 3D photo-quality people for augmented reality executions.  One of the challenges going forward is once we capture them, how do you animate them? Again, our number one constraint is that we are always fighting the time budget. Animating people by hand in a realistic manner is out of the question. So that means we have to quickly turn to Kinect motion capture.

For those that don’t know what motion capture is, it’s where you get your actors to dress up in those silly black suits in a studio and then record their movements in 3D. 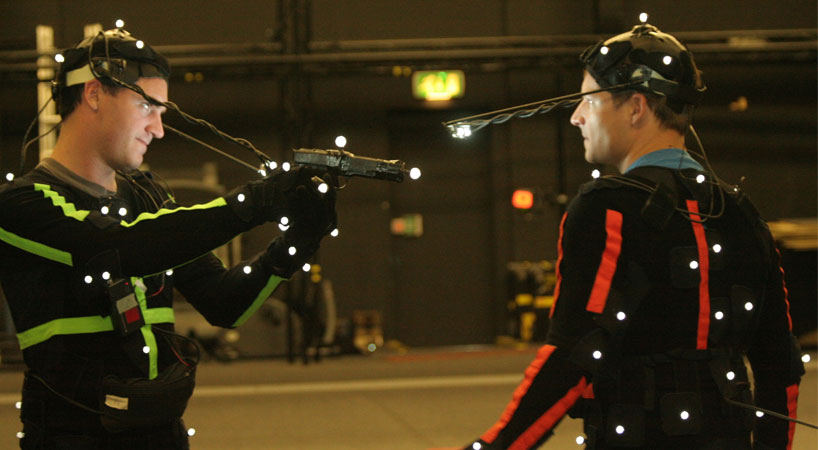 Problem solved, right? Well, not exactly.  There are a couple of main problems we’ve found with motion capture: jitter, fidelity, and cost. Most of the data that comes out from motion capture systems tend to have a lot of noise, which shows up as jitter in your animations:

Now this is usually a pretty bad problem because cleaning up jitter is a very painstaking process if done by hand. There are a couple of computer techniques that we can use, but that leads to the second problem: fidelity.  Usually, to reduce the jitter in the animation above, you can smooth out (or average) the animation.  This makes it less jittery but the downside is now you lose out on the high frequency data, which shows up as finely detailed movements.  For example, if you smoothed out all the jitter, then the subtle movements of a character shifting their weight from one leg to the next would be completely lost.  A subtle head nod would be lost. Now our thoughts are that this may or may not be a problem for body movement, but it would definitely be a showstopper for facial capture where humans can detect submillimeter facial movements. So we’re going to have to tackle that in a separate and later post.

Kinect To The Rescue

Turns out, this little company called Microsoft came out with these depth sensing cameras that can track human skeletal data. So we had an idea, well, maybe we can use these Kinect cameras to do motion capture for our 3D characters. Cost wise, these Kinect systems are only a couple of hundred dollars instead of a couple of hundred thousand–so that’s a win. But we also knew that the resolution of the Kinect is immensely low (samples at 30 hz and only captures SD resolution). So, with bated breath, Cory Strassburger from Alienna & I forged ahead to see what kind of quality we could extract out of these systems.

Turns out, we’re not the first ones to have this idea. Which is awesome. Because that meant we didn’t have to write our own software to interface with the drivers. We’ve scoured the world and tried out two different systems: iPi Soft & Brekkel.

Conclusion: results indeterminate. The key takeaway was that at this current stage and our current setup, the mocap was good enough to do rapid blocking or coarse animation. Again, for a video game type of experience, it would be fine. But, we’re reaching for the triple gold: feature film quality in realtime in 3D. So, we’re still going to need to experiment some more.  Here’s our breakdown from a day of testing…

[/list]
So this approach didn’t meet our high expectations but still provided some useful tools that we’ve now added to our toolbox.